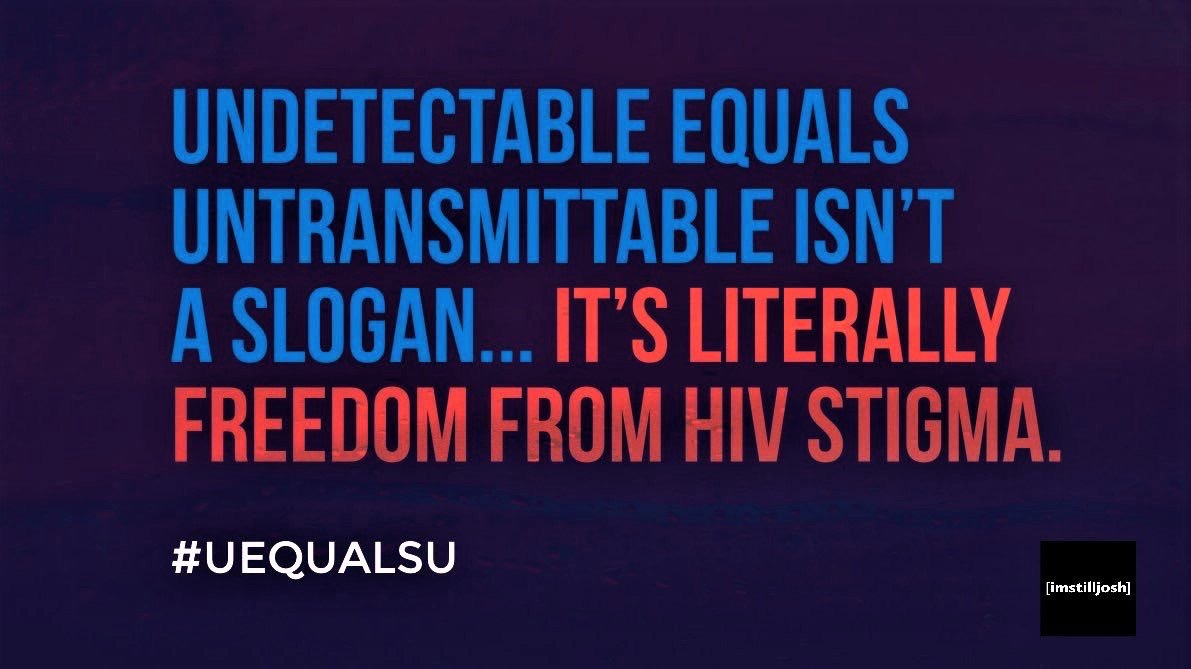 Despite the monumental importance of the U=U message, many socio-cultural, political, economic, and systemic barriers have prevented people living with HIV from being accurately and meaningfully informed about their social, sexual, and reproductive health. As a result of these barriers, including many that have existed long before the start of the epidemic, the risk from people with HIV has been exaggerated. That exaggerated risk puts people living with HIV at risk of harm and injustice. Exaggerating the risk wastes valuable opportunities to greatly improve lives and bring us closer to ending the epidemic.

There are many reasons why HIV information providers (e.g., AIDS service organizations, community-based organizations, healthcare providers, HIV communications agencies, public health departments, and HIV/AIDS media outlets) have not been communicating U=U to people living with HIV and the general public.

First and foremost, U=U is radically at odds with the status quo. After decades of deeply ingrained fear of HIV and attachment to the established dogma about how to prevent it, it is difficult to accept that people living with HIV can be no risk to their intimate partners and can conceive children without alternative and costly means of insemination. Shifts in attitudes, beliefs, and behaviors take time, especially when impacted by the unprecedented trauma of the AIDS epidemic.

The longstanding history of paternalism and patriarchy in medicine and public health has stripped agency from people living with HIV, especially marginalized communities, and made it an acceptable practice for healthcare workers and other information providers to serve as gatekeepers of vital health information.  When the U=U campaign initially sought endorsements from medical providers and research associations, many agreed with the science but expressed concerns that if they shared U=U with their patients with HIV, then they would stop using condoms and there would be a resulting rise of STIs. They also expressed concerns that patients with HIV would not understand that to stay undetectable and untransmittable required excellent adherence to treatment.  Therefore, they felt it was better not to share U=U, or only to share it with patients they deemed “responsible.”  These paternalistic and unethical arguments were surprisingly widespread.

A main reasons that U=U was considered the “big secret” in HIV is because there were few accessible sources drawing an accurate conclusion about the overall clinical and observational evidence. The first public document concluding that effective treatment rendered a person no longer sexually infectious was the Swiss Statement of 2008, authored by Dr. Pietro Vernazza and published by the Swiss Federal Commission for Sexual Health. The bold and revolutionary statement was ahead of its time, yet widely criticized and denounced by the field. After the Swiss Statement, there was a groundswell of groundbreaking clinical evidence, including HPTN 052,  PARTNER, and Opposites Attract. However, even after the final reports of HPTN 052 and PARTNER were published in July 2016, with the exception of a few pioneering NGOs like Terrence Higgins Trust in England, the studies were typically promoted independently and were subject to the politics, biases, and inaccuracies of HIV information providers.

Although there were indeed more sources in print and video that confirmed U=U, they were limited to circulation within the HIV research community. For example, one such source was a position paper from the European AIDS Treatment Group from 2015:

“EATG calls for much better public information to be made available in Europe and globally about the prevention benefits of antiretroviral therapy (ART), and in particular the fact that HIV-positive people with undetectable viral loads are not infectious. Widespread ignorance of this fact helps perpetuate stigma against and criminalisation of people living with HIV and it should be the subject of a funded public awareness campaign, possibly to run in conjunction with a PrEP awareness campaign.” European AIDS Treatment Group (EATG) (October, 2015)

Most HIV information providers did not have the authority or experience to draw explicit conclusions from the research. Some HIV information providers used risk reduction assessments such as “greatly reduced risk” or “less likely to transmit.” Such phrases are often understood as a reduced risk, but still a risk to be taken into consideration when in fact there was, and is, no risk.

We believe all people living with HIV have a right to accurate and meaningful information about their social, sexual, and reproductive health based on science not stigma. Ending the epidemic requires bold new approaches to dismantle HIV-stigma, improve health outcomes, and prevent transmissions.

“CATIE recently endorsed the Consensus Statement of the Prevention Access Campaign, celebrating the fact that ‘undetectable equals untransmittable.’ This revolutionary statement, pushed forward by a dedicated group of people living with HIV, has prompted CATIE to reflect on our sexual HIV prevention messaging.”